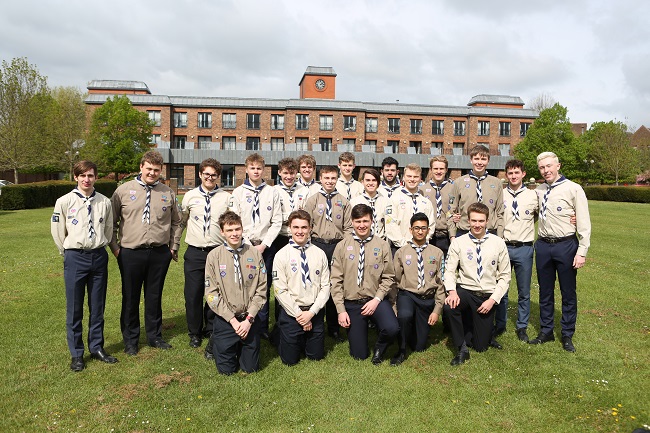 Explorer Scouts at The Grammar School at Leeds (GSAL) have enjoyed a record-breaking year, with an unprecedented 20 scouts earning the Queen’s Scout Award.

The Queen’s Scout Award is the highest award possible for a member of the Scout movement, and GSAL’s award winners were among 400 Queen’s Scouts gathered at Windsor Castle last Sunday for a national day of celebration.

The event included a parade by the scouts and a service in St George’s Chapel. In attendance were HRH Prince Edward, Duke of Kent, and the Chief Scout Bear Grylls, both of whom spoke individually to scouts assembled for the parade.

Queen’s Scout Miles Falivene-Rook, a Year 13 student at GSAL, said: “It was a once in a lifetime experience which brought home to us how big the scout community is. Scouting has taught me so many skills and has been a major part of my life which I plan to continue after I leave school.”

Harry Hirst, Year 13, unit chairman, said: “With 400 scouts there from across the country, it was amazing to think that GSAL made up 5% of the Queen’s Scouts.”

GSAL’s Scout Leaders are Annette Jones, Sandra Bavill and Alan Naylor, who said: “Having followed our scouts’ development from Cubs through to Explorers we are extremely impressed by their commitment and this ultimate achievement. They are real ambassadors for both the school and the Scout movement, and we were proud to share their special day at Windsor.”

GSAL’s Queen’s Scouts will receive their certificates from the County Commissioner of Central Yorkshire, Ian Hill, at the Scouts AGM in school this Friday.

The Queen’s Scout Award recognises exceptional achievement in a number of different areas. Scouts must develop a skill, such as first aid, engage in physical activity, which might be a team sport or going to the gym regularly, and do voluntary work over a 12-month period. GSAL voluntary projects have included working in a care home and helping as young leaders in cub packs and scout troops.

Scouts also undertake a four-day backpacking expedition, which for the GSAL group was a traverse of the Brecon Beacons and Black Mountains, and must also complete a five-day residential course, such as the National Citizen Service. They must also study topics in the spheres of community, values and international friendship.

Photo courtesy of The Scout Association.