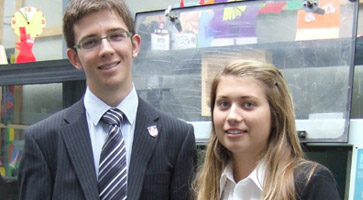 To achieve the scholarships, Alex and Vicky had to go through a complex selection process. The first stage was an extended application form, in which they had to describe their GCSE technology project and to explain how engineering interests them. Next was a two-hour exam, focusing on the design stage of a system. This was followed by an interview at Loughborough University, renowned for engineering.

Arkwright Scholarships for engineering, named after the 18th Century engineer, Richard Arkwright, are given to pupils studying A Levels. Engineering companies give £1,000 per scholar of which £400 goes to the school, £500 is paid to the scholar over a period of two years and the remaining £100 goes to the Trust.

Amanda Tait Head of ADT said: “This is an outstanding achievement on Vicky and Alex’s part and also for the school. This is the seventh year running that we have had successful Arkwright applications, and Vicky is our first female scholar.”

Photographed in the GSAL ADT department are Alex White and Vicky Greenwood.