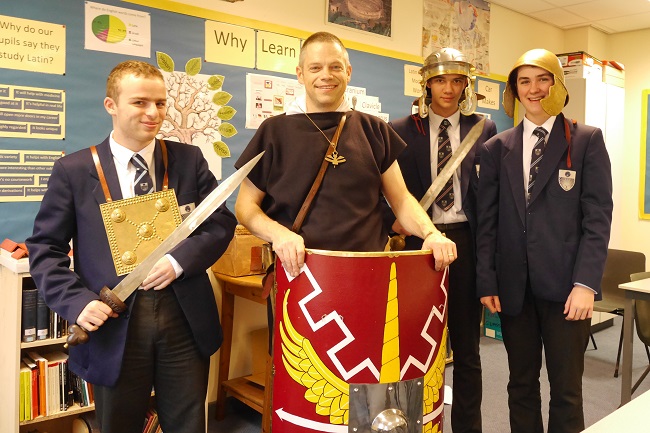 Vet turned bestselling writer Ben Kane soon caught students’ attention when he visited GSAL; so fully has he embraced his new direction in life that he gives talks dressed in Roman military uniform.

He even had the accessories to go with the outfit – hobnail boots, swords, armour, a helmet and cap, and a mail shirt weighing in at 9kg. These items helped bring to life the world that Ben recreates in his books, based on real historical events and informed by his own travels around the world.

Having fulfilled his childhood ambition to become a vet, Ben set up in small animal practice but soon discovered his itchy feet and set off travelling in the late nineties. A visit to the ruined city of Merv in Turkmenistan made a lasting impression and set him thinking about writing military history.

Ben returned to the UK in 2001, working as a vet in the northeast during the foot and mouth outbreak. As respite he spent many days exploring Hadrian’s Wall, where his imagination ran riot as he walked in the footsteps of the Roman soldiers.

Thus inspired to pursue his goal of becoming a writer, Ben published his first book The Forgotten Legion in 2008. 14 books (one as co-author) later, Ben is about to complete the Eagles of Rome trilogy, with Eagles in the Storm due out in March 2017. He has also raised around £65,000 for charities including Combat Stress and Médecins Sans Frontières by completing long distance walks dressed in full Roman military gear.

His message to students based on his own experience was: “You can change career, don’t let your choice after school define you. You can do lots in life with the education you have. Three years of travel educated me about the world, and in 2016, with everything that has happened I have a broader view of the world.”

Ben spoke to the whole of Year 8, all of whom study Latin and classical civilisation as part of their curriculum, and later to students from across the school with a particular interest in classics.