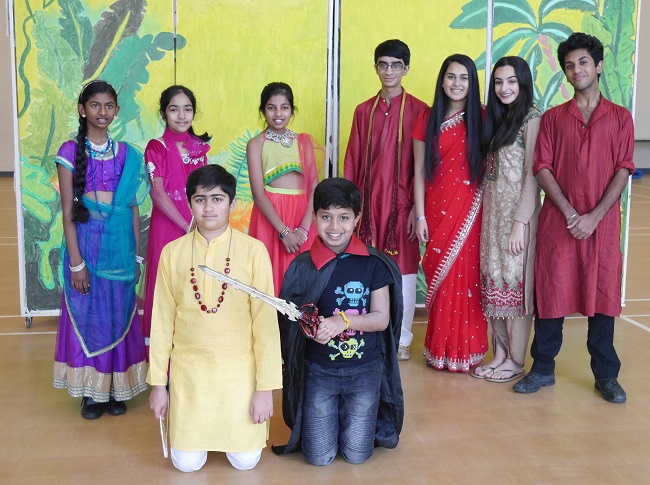 A Leeds school’s Diwali Show has raised vital funds to bring light into the lives of disabled and disadvantaged people and those affected by disaster.

The show at The Grammar School at Leeds (GSAL) brought together performers of all ages from within the school and the local community to celebrate Diwali with a spectacular programme of drama, dance and music. There were fifteen different acts, as well as a student fashion show, a quiz and presentations about the festival and the charity.

Now in its ninth year the Diwali Show is an annual highlight at GSAL, and has raised thousands of pounds for charity. This year’s show was held in aid of the charity Sewa UK, and is expected to have raised in the region of £1,500.

From booking the acts to presenting the show on the night, the whole event was planned and organised by the student heads of Hindu faith, upper sixth students Dhaval Sethi, Maya Bhakta, Carody Vyse-Peacock and Naman Gupta. They had support throughout the process from Senior School teacher Amy Yuasa, student head of the Sikh faith Gurvir Bagri and fellow upper sixth student Jamie Lee.

Carody said: “We learned a lot from organising the show and enjoyed the experience. Presenting the show was something I don’t usually do and it improved my confidence, as did liaising with all the performers.”

Naman said: “We worked together well and have become great friends. It was a very successful evening and brought all faiths together, thanks to all the help we had from our sixth form friends and many others.”

A new challenge for the students was writing and directing the Junior School Ramayan, the Diwali play performed by GSAL pupils in Years 3 to 6.

Mrs Yuasa said: “The students worked so hard, writing the script, organising rehearsals and getting the best out of a cast of young children. It has been a great partnership between the junior and senior schools. The whole event was a wonderful showcase of modern and tradition culture and brought together all age groups across school and the community.”

The Sewa UK charity is so called because in Sanskrit, Sewa means service, reflecting a concept of selflessly performing an act of kindness without expectation of reward. Sewa UK supports relief and rehabilitation efforts following disaster, and projects that cater for people with disabilities, including educational projects, mostly in India and Nepal but with some UK based projects.