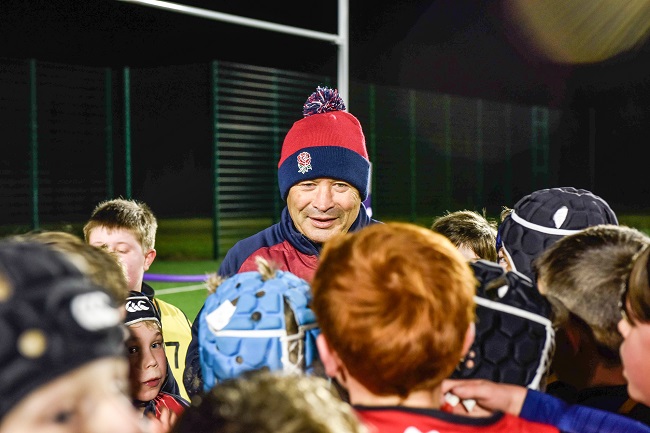 Within a month of taking England to the Rugby World Cup final in Japan, Eddie Jones is on the road again, talking about his new autobiography Eddie Jones: My Life and Rugby.

Visiting Leeds on Thursday evening to give a talk for Ilkley Literature Festival, Eddie also showed his support for the next generation of rugby players. He put 60 junior players through their paces during a training session on the new 3G pitch at The Grammar School at Leeds (GSAL).

Representing GSAL Junior School and local rugby clubs (West Park, Leodiensians and Roundhegians), the players looked on as Eddie cut the ribbon to officially open GSAL’s 3G pitch. The new facility is used extensively by community football and rugby clubs as well as the school.

The youngsters then came in from the cold to quiz Eddie in a special Q&A session. When asked what qualities he looks for in his players, Eddie advised: “Someone enthusiastic who wants to be involved and touch the ball, who helps their teammates, and wants to compete.”

Later in the evening, Eddie was in conversation about his autobiography with Ian Ritchie (Leeds Grammar School alumnus) for an audience of 450 in a session hosted at GSAL for Ilkley Literature Festival. Ian was the ideal choice of interviewer – he had recruited Eddie as England head coach during his time as chief executive of the RFU.

Their discussion ranged from his childhood in Sydney, when being good at sport became a way to fit in, his teaching career which peaked at acting principal of the International Grammar School in Sydney, the highs and lows of playing and coaching rugby, the support of his family, and his reflections on the Rugby World Cup in Japan.

Eddie said: “It was fantastic, the country put on a great show. They’re not that much into sport so for rugby to take off was unbelievable, and the home team was brilliant.”

He added: “I haven’t worked a day since I finished as acting principal! I just love doing what I’m doing, I’m so lucky.”

GSAL has worked in partnership with Ilkley Literature Festival since 2012, hosting or sponsoring events and supporting local schoolchildren in attending author talks. 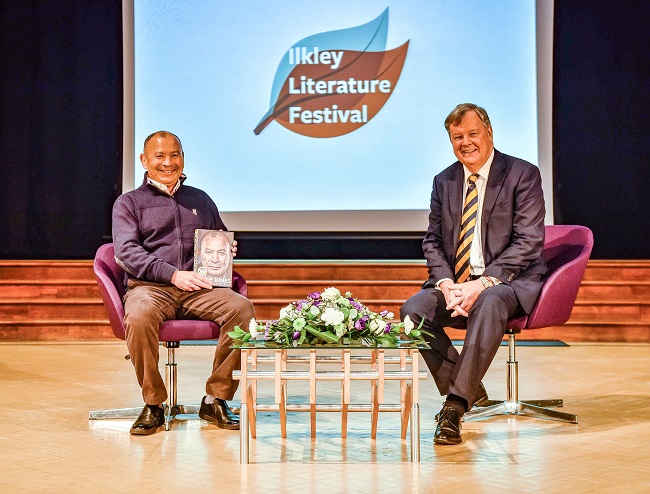