Jamie and Ben talk their way into top debating final 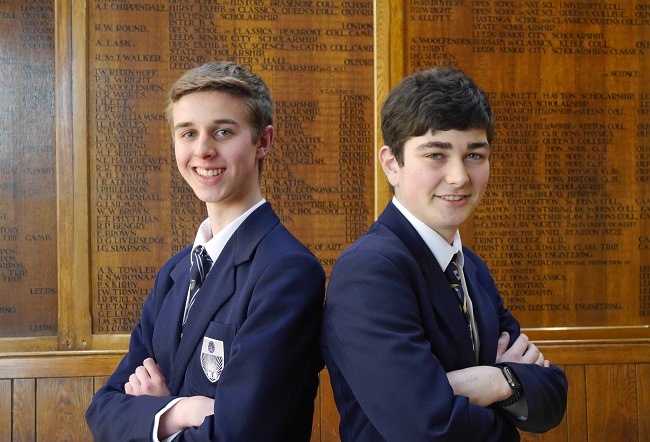 Two students from The Grammar School at Leeds (GSAL) have shown maturity beyond their years in reaching the finals of a prestigious debating competition for schools.

Year 11 pupils Jamie Smallbone and Ben Wheatcroft will be the joint youngest finalists when they take part in the grand final of the Oxford Schools’ Debating Competition next week.

Run by the Oxford Union, the ‘Oxford Schools’ is the biggest debating competition in the UK and is aimed at students aged 14 to 18. Finals day takes place on Saturday 9 March in the Oxford Union and involves around 120 of the best teams from the UK and international rounds.

The boys talked their way into the final at the north regional round held at St Peter’s School in York, and did well to progress against mainly sixth form teams. They had to do two debates, and only learned the motion and whether they would propose or oppose 15 minutes before each debate.

Jamie and Ben are active members of the senior debating society at GSAL and hone their debating skills at the regular weekly meetings, which they hope will stand them in good stead on finals day. Ben said: “We can’t really prepare because we don’t know what the motions will be, so all we can do is lots of debating and keep up to date with current affairs.”

Jamie explained the appeal of debating: “It’s interesting to debate and make arguments whether or not you believe in your given position on the motion. Debating builds confidence and public speaking skills and it’s enjoyable!”

GSAL students have achieved other notable debating successes this year. Year 13 students Sam Kunin and Saumit Benkalker won the Manchester schools debating competition and both also came third in the individual speaker competition. Mona Albazi, Year 11, and Amy Alexander, Year 12, made it to the novice final of their first ever competition at Nottingham University’s Schools’ Debating Competition.