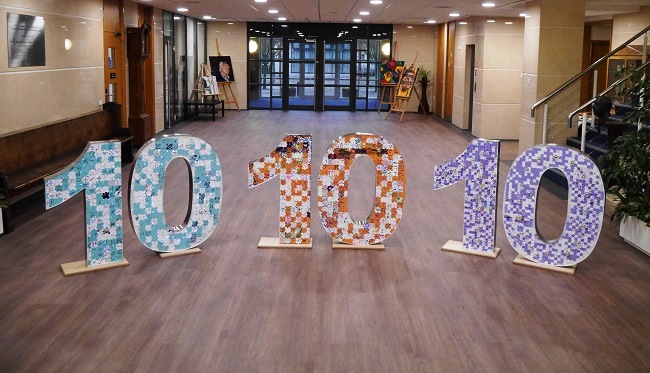 The Grammar School at Leeds (GSAL) was 10 years old in 2018, and every pupil and member of staff was invited to contribute to a lasting memento of the birthday year as it draws to a close.

From the youngest to the oldest, everyone signed a piece of jigsaw to create four freestanding number 10s. Standing 1m tall, there is a figure 10 for each of Rose Court, Junior School, Senior School and Sixth Form.

The project was led by the design and technology (DT) department; the pieces of the jigsaw were cut by DT students from Y12, and students from Y9 and Y10 were then tasked with gluing each signed piece onto the number 10s.

The birthday celebrations involved the whole school community, starting with a launch party for alumni and staff in February, when Y9 students performed their own musical compositions aptly entitled Nostalgia, The Future and Coming Together.

Creative projects and performances continued through the year. The 10th Tebb Piano Competition brought together the event’s founder Robert Tebb (OL43) and the first ever winner of the competition David Franklin (GSAL2010). Every child at Rose Court placed a piece of mosaic into a commemorative birdbath to be positioned in the school grounds, and Junior School pupils planted a lavender flowerbed in the shape of a number 10 at Alwoodley Gates.

Alumni of all three constituent schools have been involved throughout, with a highlight being the inaugural Leeds Luminaries Awards in November. The awards, presented by the school’s funniest old boy, comedian Barry Cryer (OL53), recognised the achievements of alumni in many walks of life.

GSAL Principal Sue Woodroofe said: “Our birthday year has been an opportunity both to celebrate this moment in GSAL’s life and to highlight the two great schools from which we were founded. Between us, we have educated talented young people from Leeds for over 600 years, many of whom have gone on to achieve greatly in their specialist fields.”

Thanks to another initiative, the birthday bursary campaign, and the generosity of our donors, almost £1m has been raised to fund 11 new bursaries to enable more children to benefit from a GSAL education in coming years.