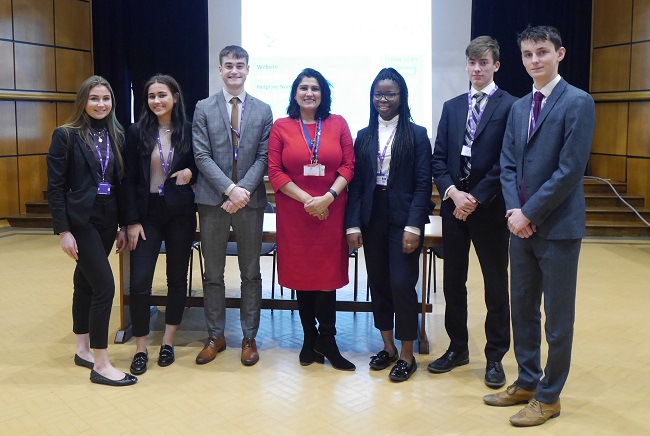 At the age of 15, Jasvinder Sanghera was taken out of school and kept captive in her own bedroom by her parents, because she refused to marry the man to whom they had promised her.

Speaking to an audience of sixth form students at The Grammar School at Leeds (GSAL), Jasvinder explained how she bought her freedom – by agreeing to her parents’ demands. That freedom had its price; to escape the forced marriage she ran away from home and found herself living alone aged just 16, disowned by her family.

Her early experiences, which included seeing her sisters forced into abusive marriages against their wills and one sister driven to suicide, set Jasvinder on a path to helping other women avoid the same plight.

She set up the charity Karma Nirvana in 1993 to campaign against forced marriage and honour based abuse, and to support victims. The charity’s services are as vital as ever, despite campaign successes including forced marriage becoming a criminal offence, and the setting up of a government Forced Marriage Unit.

Karma Nirvana’s helpline handles 900 calls a month, from young people who are, or fear they may become, victims, as well as professionals with concerns about vulnerable individuals.

Although Jasvinder has stepped down as the charity’s chief executive, she still campaigns tirelessly to raise awareness of the issues and was recently appointed the independent chair of Leeds Safeguarding Children Partnership.

Jasvinder left her student audience with this advice: “You all have political power and can hold politicians to account. I wasn’t afraid to ask them ‘what are you doing about this issue?’ You can make a difference as effectively as I can, you just have to believe it.”

The talk launched the new series of talks by inspirational speakers, which forms part of the Aspire programme for sixth form students offering new experiences, skills and challenges to complement their academic studies.