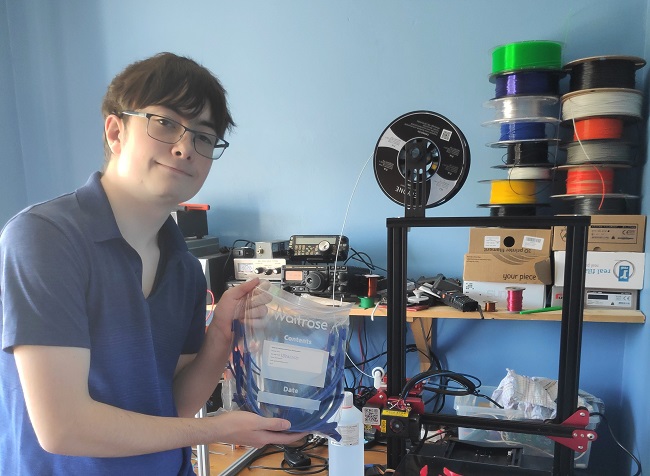 A Leeds teenager has spent an engineering scholarship fund on a 3D printer to enable him to produce personal protective equipment (PPE) for frontline NHS workers.

Seventeen-year-old Jake Howarth, a sixth form student at The Grammar School at Leeds (GSAL), is already producing visors on an old printer at his home and has spent the money awarded to him by the prestigious Arkwright Engineering Scholarships, part of the Smallpeice Trust, on a newer, faster model.

Jake, a budding engineer, received a £600 financial award from the Trust after a highly competitive selection process. The funds are intended to support students of science, technology, engineering and maths (STEM) to help with their A-level studies and fund activities to promote their understanding and experience of engineering.

Jake couldn’t think of a better way to spend his award than to invest in a new printer to work alongside an older one which his parents had bought him as a Christmas present five years ago.

He is currently combining his Year 12 school studies with voluntary work for 3D Crowd UK, a group of more than 8,000 volunteers around the country who are using their manufacturing expertise and equipment to produce PPE to combat the shortage in the NHS and care homes.

For his part, Jake is producing the headband and bottom reinforcements for the face shields before the transparent sheet is affixed to the frame. He said: “We don’t just need makers though. We also need people who are willing to drive vehicles to collect and deliver PPE, as well as those willing to act as hubs.”

And he appealed for people to support 3D Crowd UK’s fundraising to help pay for the filament which is used to make the frames, as well as the clear plastic sheets and the straps.

He said: “So far we have raised £144,000 and we are pushing to reach a new goal of £250,000. This money, combined with donations of filament from makers, means we can produce and ship a visor for £1, along with using some of the excess funds to set up injection moulding tooling for mass production.”