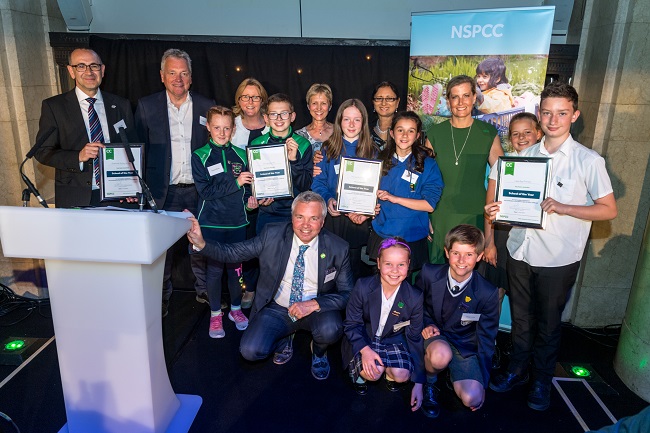 The Grammar School at Leeds (GSAL) has been recognised at the NSPCC’s Childhood Champion Awards for the spectacular fundraising efforts of pupils in Junior School.

The NSPCC named GSAL one of their ‘outstanding schools of the year’ following the junior pupils’ sponsored spelling championship earlier this year, which raised £7,247.13 for the charity. Pupils in Years 3 to 6 took part, having been inspired to fundraise for the NSPCC after volunteers from the charity delivered a Speak Out Stay Safe assembly in school.

Head of Junior School Robert Lilley and two Year 6 pupils, Chloe O’Brien and Oliver Lumb, received the award at a ceremony this week at Banking Hall, London, and received a certificate signed by the Countess of Wessex, the NSPCC’s patron.

Mr Lilley said: “Thank you for this award, which will mean so much to our pupils as recognition for their magnificent fundraising effort. We were very proud of their hard work practising their spellings and finding sponsors, all motivated by their desire to raise funds to help other children.”

The outstanding school award was one of 12 award categories honouring the commitment, creativity and contribution of NSPCC volunteers. The awards event also featured presentations by Peter Wanless, CEO of the NSPCC, Dame Esther Rantzen, founder of Childline and trustee; and Mark Wood, chairman of the NSPCC.

Liane Smith, head of volunteering at the NSPCC, explained: “We have around 11,000 volunteers across the NSPCC – incredible people who are committed to sharing their passion, skills and time. Without all of our amazing volunteers we simply wouldn’t be able to achieve what we do for children and we’re thankful for what each and every single one of them is able to give.”