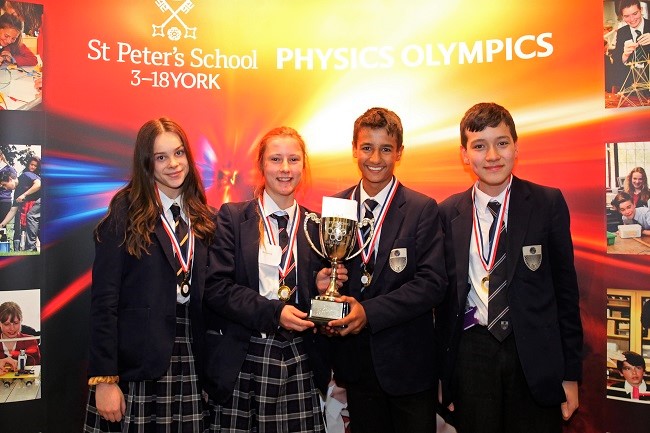 In the race to become the north’s top team of Year 8 physics students, four pupils from The Grammar School at Leeds (GSAL) were ahead of the field.

Ruby Gratton, Alexandra Hall, Rohan Ratnalingam and James Robertson represented GSAL at the 13th annual Physics Olympics at St Peter’s School, York. GSAL was one of 28 schools from across the north of England taking part in the event, which aims to inspire talented young physicists by setting them a selection of puzzling and thought-provoking tasks to challenge their scientific knowledge.

The practical tasks included building a vehicle which could travel the furthest off a ramp, constructing a tower to support the heaviest weight, designing a crumple zone for a car using art straws, calculating the swing of a pendulum and testing the effectiveness of sun creams at screening UV.

Pupils’ application of theoretical knowledge was put to the test in the Fermi quiz, with tricky questions such as ‘How many blades of grass are there on a cricket pitch?’

Each challenge was won by a different school, however with consistently high scores in all the challenges GSAL emerged as the overall winner.

Alexandra said: “It was a really fun day and we enjoyed meeting the other students. We found it challenging in a good way and we learned a lot from it, and worked well as a team.”

Andy Parr, Head of Science Outreach at St Peter’s and host of the event, said: “Seeing how passionate the children are about physics and the effort they put into the challenges is truly inspiring. Every pupil who has taken part in this year’s Physics Olympics has been a real credit to their teachers and to their schools.”