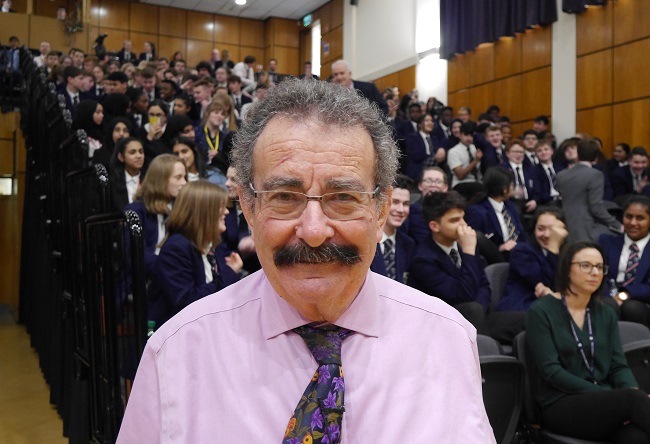 One of the UK’s most famous doctors and scientists, Professor Robert Winston, visited The Grammar School at Leeds (GSAL) to share his thoughts on the potential for science to be used or abused.

Lord Winston is Professor of Science and Society at Imperial College London, and pioneered new treatments to improve in vitro fertilisation (IVF) and pre-implantation diagnosis. He is well known for his TV and radio work including the long running BBC documentaries Your Life in Their Hands and Child of Our Time.

His talk to students from GSAL and five other Leeds secondary schools started with a history lesson including some shocking examples of how science had been misused to reinforce prejudice and deny people their human right to have children – and in extreme cases, their own right to life.

Pupils then learned more about the innovative work Lord Winston has done with other scientists, to improve fertility treatments and screen embryos to help parents carrying faulty genes to have healthy babies. This progress was made in the face of wide political condemnation, including a bill in Parliament which was defeated, and now 7m families around the world have had babies thanks to IVF.

Lord Winston told the assembled students: “I come into schools because you are the future of our society. It’s important to understand your responsibility and the need for an ethical attitude to science.”

The talk concluded with a moral dilemma – Lord Winston showed a picture of a pig embryo which had been modified for transplant into humans and challenged the students to think about whether it was ethical to use animals in this way.

Before taking questions from the audience, Lord Winston summed up his central message: “We should all understand science so that in a democratic society we can take wise decisions about how we use the science.”

Lord Winston’s visit to GSAL followed his appearance at the Science Live event in Leeds Town Hall, which aimed to show GCSE students that science offers solutions for many of the world’s great problems and encourage them to continue studying it after GCSEs.