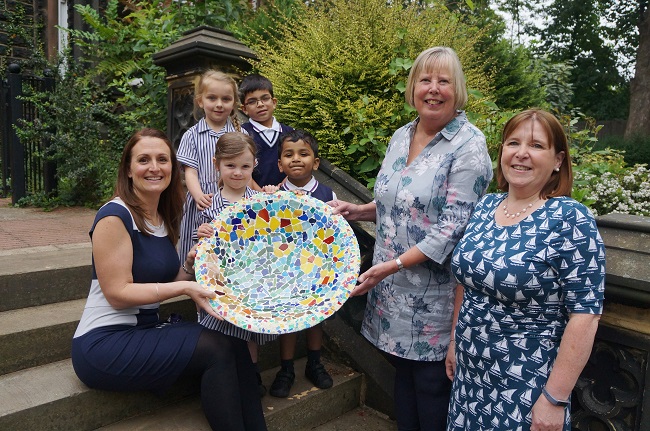 The youngest pupils at The Grammar School at Leeds (GSAL) have marked the school’s 10th birthday by creating a beautiful and lasting memorial to a former pupil.

Taking daffodils as their theme – flowers often associated with 10th anniversary celebrations – the children at Rose Court nursery and pre-prep created a mosaic birdbath. This will have a permanent home in a daffodil garden which was planted in the grounds of the school in 1994 in memory of Catherine Apps, who was a Year 8 pupil at Leeds Girls’ High School. In the autumn term following her death, her friends all planted daffodil bulbs, which still bloom every spring at Rose Court.

Catherine’s mother, June Apps, who taught chemistry at Leeds Girls’ High School from 1992 to 2007, visited Rose Court to meet some of the children and to see the birdbath, in which each pupil had placed a piece of mosaic.

June said: “The birdbath is beautiful – a combination of wonderful creativity by the children and touching thoughtfulness of the staff. I am delighted there is a link from the past to the present in such a special year- evidence that GSAL both nurtures its current pupils and still remembers and cares for its former ones.”

The birdbath project was led by teaching assistants Bev Nicholaides and Bernadette Butler, who wanted the children to work together to create something beautiful to commemorate 10 years of GSAL.

Bev said: “The children find it awe-inspiring to see how they have worked together to create something special. We decided to make a birdbath to provide a colourful focal point for children to observe visiting birds. We hope the children will be able to stimulate their inquisitive minds and their love of nature.”