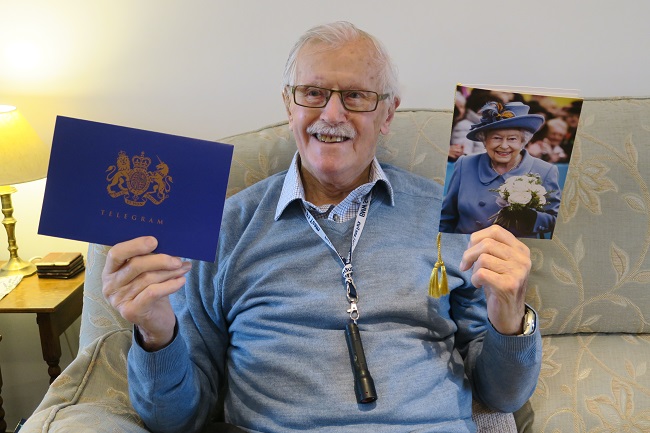 Walter Sefton Suffern (OL36) has celebrated his 100th birthday… with no fewer than five parties.

The retired doctor was guest of honour at celebrations with his family of children, grandchildren and great-grandchildren, as well as his many friends and neighbours. Sefton (as he is always known) is in good health and, until four years ago, was still driving a car and a golf ball!

He was born in Belfast on 26 January 1919 and attended Belfast Royal Academy until the age of 11. When his family moved to Headingley in 1930, he joined Leeds Grammar School where he became a house prefect and was a keen and able sportsman.

Sefton left school at 17 to begin his medical degree at Leeds University (1936-1942). When WW2 broke out, he was allowed to continue with his studies as he was already in his third year.

After graduating, he spent six months as a house physician at St James’ Hospital in Leeds doing general medicine and paediatrics, which he remembers as being tantamount to slave labour! He then joined the Royal Army Medical Corps.

By this time he had met Alison Palmer (OG38), a former head girl of LGHS and a medical student. They married on December 30 1942 and, a few days later, he set off for Algiers on an Atlantic convoy. Sefton spent the rest of the war in North Africa and Italy, treating Allied casualties and using some of the first batches of the newly discovered penicillin.

After being demobbed in August 1946, he began work as a medical registrar at Leeds General Infirmary (LGI), gaining his MD in 1947, and his MRCP the following year. While at LGI, Sefton received scholarships to study cardiology in Stockholm and in Pennsylvania.

In 1955, Sefton became Consultant Physician to the Bingley, Keighley, Skipton and Settle Group of Hospitals and in 1959 was appointed Consultant Physician to the Harrogate, Ripon and Knaresborough Group of Hospitals, where he worked until his retirement in 1984. After that he did medical tribunal work and continued his private practice for several years.

Sefton and Alison had 74 happy years of marriage until she died in 2017. During retirement he has enjoyed fly fishing, golf and playing bridge. He and Alison travelled extensively and their home was always full of guests and visitors.

The couple lived in Harrogate for many years and Sefton now lives in a residential home in the town.

He is pictured celebrating his big day with birthday cards from the Queen and Amber Rudd, the Secretary for Work and Pensions.