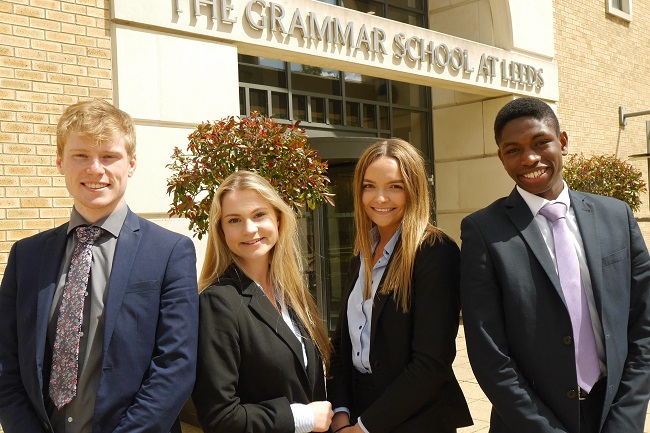 The new head girls at GSAL have the makings of a good team; having joined the school together in nursery they know by now what makes each other tick.

Joining Charlotte and Ailsa on the student leadership team for 2019-20 are two head boys, Conor Green and Toluwani Olusoga, both of whom joined GSAL in Y7.

Their appointments come after a rigorous selection process; first they had to be elected as prefects and then could apply for the role of head boy or girl. The final hurdle was an interview with a panel of senior staff, during which they had to give a presentation and then field some challenging questions.

The quartet took over their roles as soon as the current Y13 students started their study leave for A-levels. They are using this term to set the foundations for what they hope to achieve, plan ahead for the year and build good working relationships with the senior leadership team.

Conor explained why taking on the position was important to him: “I’ve gone through school looking up to others as role models, it meant so much to me when an older pupil took the trouble to get to know me personally. Now I’m in their shoes, and it’s a wonderful opportunity to increase interactions between the year groups.”

As well as being important role models to all students, the student leadership team’s responsibilities include representing the school at events and facilitating good communication between staff and students. They head up a sixth form team of school prefects, faith leaders, faculty leaders and house captains.