Year 7 bazaar is a festive fundraiser 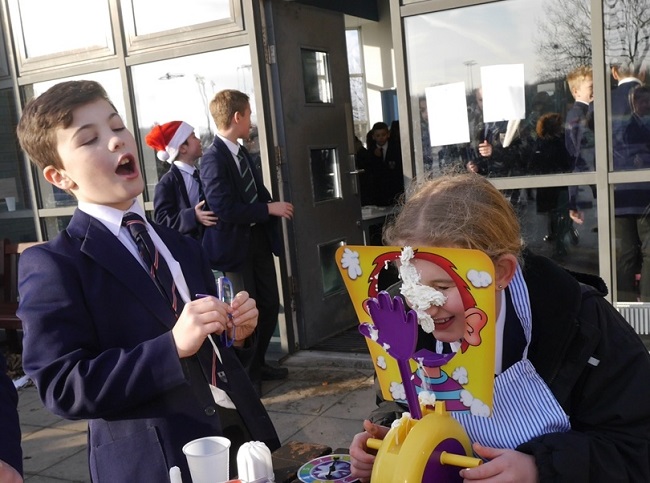 Pupils in Year 7 let their imaginations run riot as they came up with money making ideas for their festive bazaar, now an annual tradition at The Grammar School at Leeds.

Year 6 pupils were the first customers to try their hand at the weird and whacky activities on offer, making a beeline for doughnut on a string, sponge the teacher and splat the pupil. There was also more standard festive fare such as guess the number of candy canes, name the teddy and bun sales, while buskers provided musical accompaniment at 50p a go.

The bazaar is run every year in support of a charity of the pupils’ own choosing. This year they raised £780 for The Heidi Taylor Brighter Future Fund, which raises funds for Great Ormond Street Hospital in memory of children’s nurse Heidi, whose cousin Mrs Kerry Kurczij is a teacher at the school.

Mrs Kurczij said: “I was genuinely moved that Year 7 decided to donate any funds raised by their Christmas bazaar to the Heidi Taylor Brighter Future Fund. The pupils worked tirelessly with their tutors for a successful event.”

“Heidi’s all-too-short life was dedicated to children, both in her work as a paediatric nurse and in her family life; it’s a fitting and inspirational tribute to her legacy that the youngest children in Senior School took it upon themselves to raise money in her memory.

“The total raised was genuinely staggering, and I cannot even begin to express the gratitude wholeheartedly felt by my family. Thank you, Year 7 – Heidi asked us to ‘remember’ her ‘in rainbows’ when she passed away, and, just like those rainbows, the memory of your efforts will brighten my days for many years to come.”

Year 7’s contribution comes on top of £300 raised for the fund earlier this term when Mrs Kurczij’s form did a sponsored 10k relay run and pupils donated via the weekly charity collection.