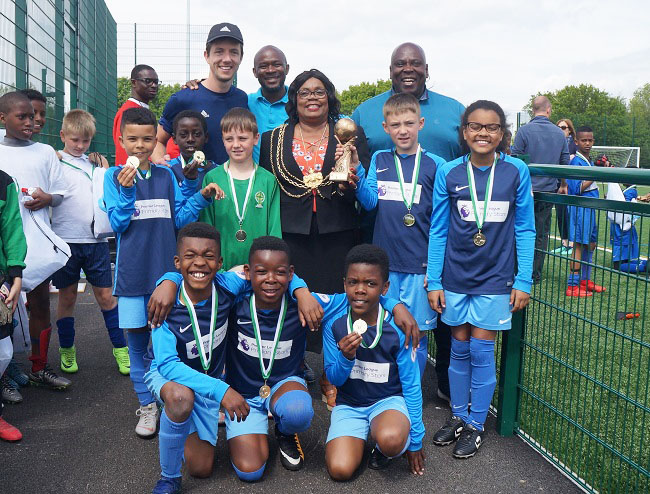 Councillor Eileen Taylor performed her first official engagement as Lord Mayor of Leeds when she presented the prizes at the Leeds Inter-School Youth Cup 2019.

Hosted at The Grammar School at Leeds (GSAL) on Thursday, the football tournament saw Year 5 and 6 pupils from 10 Leeds primary schools compete for two trophies – the cup or ‘Champions League’ and the plate or ‘Europa League’.

Each team played three group games of 15 minutes duration, with the winners and runners up from each group progressing to the cup quarter-finals. The losing teams in the quarters continued with their own mini-tournament, the plate competition.

St Patrick’s Catholic Primary School triumphed in the ‘Champions League’ winning their final 3-0 against St Peter’s Church of England Primary School, and received their trophy from the Lord Mayor.

Cllr Taylor, who took office as Lord Mayor just the day before at Leeds City Council’s Annual General Meeting, said: “I may be new to this, but I’m not new to football. It unites everyone and you make new friends, while it gives you great energy and keeps you active.”

The defending champions St Paul’s Catholic Primary School were definitely in it to win it again, but had to settle for the ‘Europa League’ title, winning the final against Wykebeck Primary School. GSAL Principal Sue Woodroofe presented their trophy.

Now in its second year, the Leeds Inter-School Youth Cup was set up in 2018 by a group of football loving volunteers who saw the game’s potential to bring people together.

Organiser Sam Leigh said: “We aim to use the tournament to teach young people the value of teamwork, provide an opportunity for them to build friendships with children from other backgrounds, schools and communities, improve mental health and, most importantly, to have fun!”

For more information about the Leeds Inter-School Youth Cup and to get involved email lisycup@gmail.com