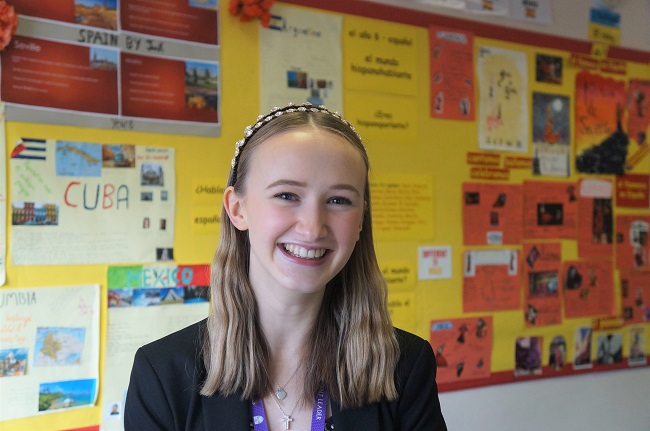 Jess Y13 won a translation competition run by Manchester Metropolitan University’s Languages, Linguistics and TESOL department, competing against Spanish A-level students from over 20 other schools around the UK.

Entrants had to translate into English a very idiomatic passage written in Spanish by a teenager, maintaining the tone and style whilst conveying the main messages. Jess said: “It was harder than A-level work as it covered a range of topics such as family, social media, politics and the internet, and was full of idioms and slang that you might not know.”

Keen linguist Jess is studying two languages and maths at A-level, and writing an EPQ on the decline in language learning. She holds a conditional offer to study Spanish and German at Magdalene College, Cambridge.

She said: “I love languages and I think Cambridge is the best place with top professors in their field. I want to study different literature in greater depth as part of a more holistic language experience.”

Meanwhile, Y13 student Aditi entered Juvenes Translatores, an EU translation competition that aims to show language students the skills expected of professional translators who can convey the style and fine nuances of the original in their translation.

The judges commended Aditi’s translation of a difficult passage from Spanish to English, praising her understanding of meaning and context and her interpretation of the original, being creative yet true to meaning.

Aditi was awarded a Juvenes Translatores special mention diploma, in a year in which only 271 out of the 3116 participants were recognised for the quality of their translations.