Staff panto has BEAN a triumph 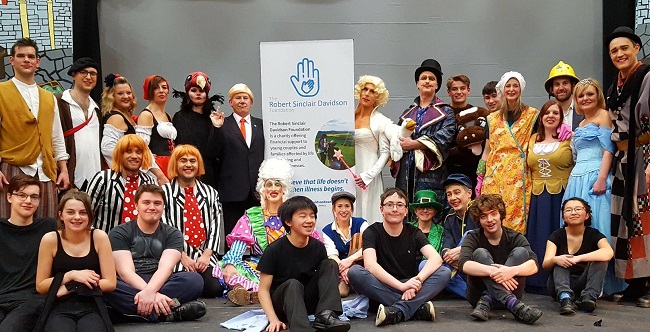 Jack and the Beanstalk, performed by GSAL staff, played to packed houses for three nights. The show raised £5,000 for the Robert Sinclair Davidson Foundation, a charity set up by Leeds Grammar School old boy Robert Davidson to support families affected by life threatening and terminal illnesses.

The pantomime is reviewed by Y12 student Lauren McGaun:

GSAL’s very own tale of the heroic deeds of Jack and his cow Buttercup taking on the giant in a series of unfortunate events dazzled viewers during a cold, miserable January.

As the lights first flicker, on comes the trusted Costa fairy played by Mr Costa (no advertising intended), bringing with him glorious purple lighting (Jake Howarth) and a magic star wand.

Appetite for a villain grows among the spectators and they aren’t disappointed as “not evil, just misunderstood” Poison Ivy (Miss Pintaudi) soon enters the stage to a barrage of boos.

She is however, soon outdone by “Dozy Dick” (Mr Tyndall) who the audience instantly fall in love with, and his mum, the attractive Dame Trott (Mr Simon Knowles, who also wrote the script).

Other well loved characters include the postman (Mr Gibbin) who’s actually liked more for his handing out of éclairs rather than his acting prowess, Dib (Mr Belcher) and Dab (Mr Dodd), incompetent despite going to “henchman clinic every Wednesday this term”, as well as the Squire’s (Mr Morris) assistant (Mr Rushworth) who took on every role possible due to staffing cuts – from his stint as royal trumpeter to his appearance as a police officer, the crowd find his one liners hilarious.

The show also doesn’t lack topical relevance considering the giant (Mr Dunn) was depicted as Donald Trump. From his side-splitting “I’m making things great again” reference to his fetching orange tan (soon to be destroyed by a cream pie splat), the audience are assured that GSAL has a panto positioned perfectly in the 21st century.

The biggest shock of all comes in Miss Rounce’s unannounced return to deliver a sensational rendition of Miley Cyrus’ ‘Climb’ with musical accompaniment from student band the Aerials. There is plenty of other student involvement, thanks to the technical crew and of course Buttercup the cow (Y12 students Will Poskitt and Josh Borlant).

My favourite moment has to be when Jack (Mrs Veitch) and his gang including the beautiful Princess Rose (Miss Hayward) try to run away from the villain and end up in a discombobulated mess in slow motion with chicken run music playing in the background; it looks like a scene from an invented Roundhay Park Olympics.

The show is topped off with a grand finale sing song of ‘It’s a celebration’ as the whole audience applauds this breathtaking extravaganza appealing to all ages with its topical references, side-splitting puns and lyrical favourites.